Let me help you start, build, and better organize your social justice organization!

Since 1984, Ahjamu has participated actively within the worldwide Pan-African movement. This work has permitted him to contribute to the development and sustainment of independent schools in several countries in Africa and throughout the United States, including the School for African Roots in Portland, Oregon, and the West2West Movement’s Independent school in Sacramento, California. Ahjamu has engaged in social justice work ranging from helping negotiate gang treaties to fighting for people illegally evicted from their houses to reclaim and defend their right to be in their homes.

In 2016, at the request of the Rural Organizing Project (ROP) in Oregon, Ahjamu helped lead a security team that supported ROP activists in organizing efforts in 11 towns throughout Oregon despite the constant threat of violence from white supremacist militia groups. Ahjamu has also helped organize security for a diversity of social justices causes ranging from Black Lives Matter to women and Trans Pride marches.
Ahjamu is a prolific writer. He facilitates a widely read blog (www.abetterworld.me) that chronicles his political organizing work as well as current events on everything ranging from economic exploitation in Africa to rape culture within the U.S. He has authored four books. The 2010 “Find the Flower that Blossoms.” The 2015 “The Courage Equation.” The 2015 “Mass Incarceration is About Profits, Not Justice.” And, the 2019 “The Paradox Principles.” He is a recipient of the 2003 Dolores Huerta Activist Award, the 2018 Shanghai, China, Writing Program, and other highlights of and to his work.
Some links to some of Ahjamu’s activist work:

For more information please contact:
Ahjamu Umi
(360) 980-1409
The donate button is specifically for those who recognize the challenges of organizing for African liberation and human progress.  Any assistance goes towards the work described on this site. 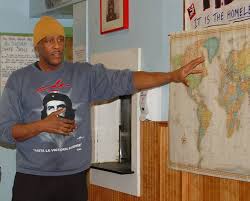